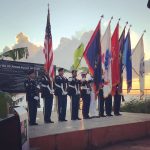 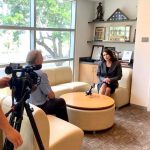 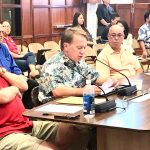 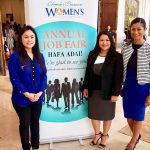 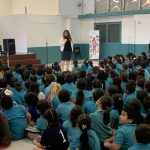 The “Buy Local Commitment” supports the Buy Local movement, emphasizing the value of local activities on Guam to grow Guam’s economy. Buying Local means to purchase products and services offered by local businesses that are the backbone of our island’s economy. This commitment is a company's pledge to "Think Local, Support Local, Buy Local," whenever possible. Think local would ask companies to think about a local product, company, or organization before any other; Support Local by contributing to major non-profit organizations on island; and, Buy Local by shifting at least 10% of a company’s on-line or off-island purchase to local businesses. This is a program developed by the Guam Chamber of Commerce, Guam Economic Development Center and the University of Guam’s Pacific Center for Economic Development.

A program of the Chamber that brings women professionals together once a quarter to enhance personal and professional growth, allowing for participants to connect with other women of all career levels to strengthen professional networks and engage in the Guam business community.

Welcome to the Chamber Biz Box & Members Spotlight, these podcasts is all about our private sector. We feature the issues and successes we face as a business community and interesting tidbits about the entrepreneurs and leaders that make a difference to ensure that our private sector continue to grow and flourish.

Click the episodes to take you to our podcasts! 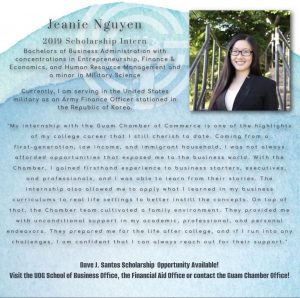 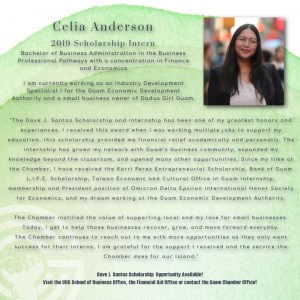 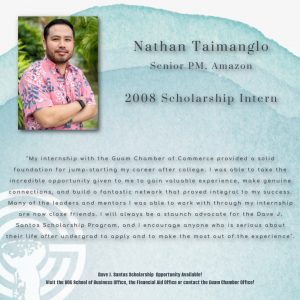 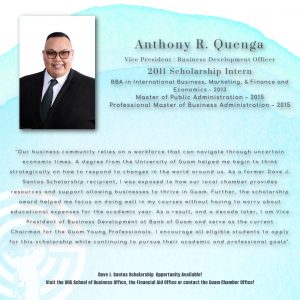 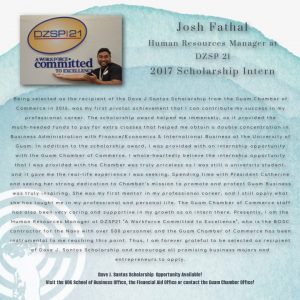 A scholarship fund was established in 1993 to assist business students enrolled in the University of Guam’s School of Business. The scholarship was named in honor of the late Dave J. Santos, past Chamber Board Chairman, Guam’s 1993 Small Business Person of the Year, and a strong advocate of local entrepreneurship. The scholarship is available to eligible juniors and seniors in the undergraduate business program and to eligible graduate students in the School of Business. 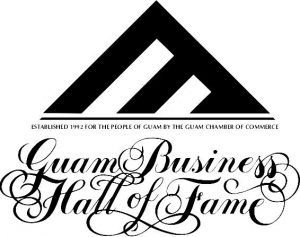 leader (employed, retired or deceased) who have made exceptional contributions to business and industry in Guam. The aim of the Business Hall of Fame is to recognize Guam's champions of free enterprise and entrepreneurship through the Guam Chamber of Commerce.

Any individual or for-profit enterprise licensed to do business in Guam. Business must have operated in Guam for a minimum period of ten years.

Individuals and companies nominated for admission into the Guam Business Hall of Fame will be selected on the basis of key criteria.

• be recognized as having been a successful business for at least 10 years and was/is a credit to their industry;
• have developed a product or service that met community needs;
• have demonstrated successful management of resources to enhance productivity and profitability over an extended
period of time;
• have maintained good labor/management relations; encouraged others to be entrepreneurs; and,
• have demonstrated outstanding commitment to community involvement.

An induction ceremony will be part of the Chamber's 99 th Anniversary Celebration on May 6, 2023. A special program centered on the life of the Laureate and Business recipient will be featured. The Laureate (or designated representative in the case of a deceased Laureate) and Business Awardee will receive symbolic awards designed to be representative of Guam and visually symbolize strength, keenness of vision, and great achievement in business leadership. 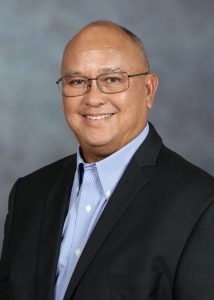 Laureate embodies the entrepreneurial spirit and believes in leading by example. He has earned a reputation in the Guam community from the dirt tracks into the showroom when he started his family-owned and operated automotive dealership. His career on Guam first began in the motorcycle and automotive industry with Island Imports. It wasn’t long before he would be asked to tackle on customer service duties, and it was soon noticed that he really had a talent for selling and working with people. In 1988, Laureate was offered to manage a Ford/Toyota dealership in Idaho. Laureate had worked for various dealerships: Big Island Toyota in Kona, Hawaii, to include Triple J Motors and Keico Motors, in Guam. Over the next 10 years, that laid the groundwork for his dream – to open his own dealership. With the establishment of CarsPlus in 1999 as a used car dealership, Laureate was able to lead the company and build a state-of-the-art service & parts auto center and tire vendor in Maite in 2008. In 2017, Laureate acquired the former Guam Harley-Davidson which now operates as a brand-new dealership, Harley-Davidson of Guam. The auto center operates the sales and services for Ram Trucks, Chrysler, Jeep, Dodge Hyundai and Fiat vehicles. In addition to founding CarsPlus, Laureate, who also grew up a racer ad avid powersports enthusiast also founded Cycles Plus which is Guam’s authorized dealer for Kawasaki, Honda, Suzuki and Polaris. Cycles Plus is also located in the same location.

The Guam business associates has nominated and awarded Laureate for his success as the 2006 U.S. Small Business Administration State Businessperson of the Year for his commitment to entrepreneurship, 2005 Hyundai – Award of Excellence for distributors who exhibit strong performance, commitment, leadership and growth in the Asia Pacific Region, 2004 Guam Business Executive of the Year for his entrepreneurship and leadership in the business community as Guam’s proud locally-owned and operated dealership, 2003 DiamlerChrysler – Leadership Award for his leadership and exemplary performance, Athlete of the Year and Top 25 Athletes of the Century from KUAM for decades of racing both professionally and locally in motocross and now buggy.

Laureate is considered a role model to many because of his tireless work ethic, business acumen and vision. His family are a testament to Laureate’s leadership and guidance. His wife, Joyce Quinata Crisostomo is the Executive Director of CarsPlus, daughter, Leonora Crisostomo Rapolla is the General Manager of Thrifty Car Rental, daughter, Jennifer Crisostomo Camacho is the Senior Vice President of CarsPlus, son, Joey Crisostomo Jr. is the Sales Manager of Cycles Plus.

Laureate has served the people of Guam for over 20 years through his family businesses and community involvement. Laureate can be found today with his four grandchildren, the future line of successors at CarsPlus, “Driven by You”.

The Chamber, in partnership with the Superior Court of Guam’s Juvenile Drug Court, developed a program of basic skills workshops designed for youth participants. The courses are grouped into four categories: Work or Job Oriented Skills, Life Skill or Personal Interest, Self-Esteem and Goal Oriented Skills, and Sports & Health Development Oriented Skills. The categories are further broken down into specific topics, which are focused and short in duration such that success can be readily achieved. Life skills activities offer necessary skills to encourage self-reliance, access to resources, and engagement into the community. Courses are conducted by the owners and top managers of the more than 300 companies that are members of the Guam Chamber of Commerce.

Through its partnership with the Judiciary of Guam, the Chamber has joined the U.S. Drug Enforcement Administration and the Guam Red Ribbon Week Committee to promote safe, healthy, drug-free lifestyles throughout the month of October, which culminates with the nationally recognized Red Ribbon Week. This campaign provides an opportunity for communities to unite by bringing together parents, schools and businesses as we look for new and innovative ways to keep kids safe and drug free. The Chamber encourages business members to participate in school outreach programs, place a Red Ribbon message or logo on their advertisements, wear Red Ribbons and distribute ribbons to their employees, and support the island wide “wear red day.” The event includes community outreach at shopping malls, education outreach at schools, a poster contest, a 5K run, and ends with the “Say Boo! To Drugs” event at Agana Shopping Center at the end of October.

This annual recognition, honors one Chamber member company, group, or organization who makes or has made a noteworthy contribution to the growth of small business in Guam with the development of sustainable practices, products and/or services. The recipient of the award is announced at the Annual Small Business Expo event. The Small Business Excellent Award program is a component of the Small Business Focus & Development Committee. 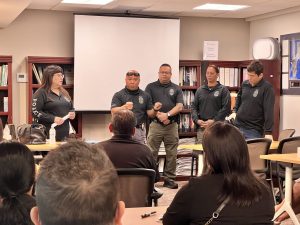 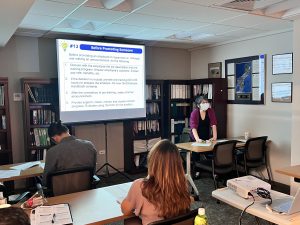 A series of monthly seminars developed by the Chamber’s Small Business Focus & Development Committee in cooperation with the Guam Small Business Development Center, and presented by Chamber members. Initially developed with small businesses in mind, each seminar provides guidance and instruction on a variety of topics to assist all companies, including customer service, tax issues, fraud and economic trends. 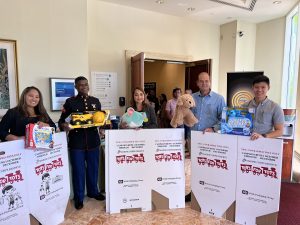 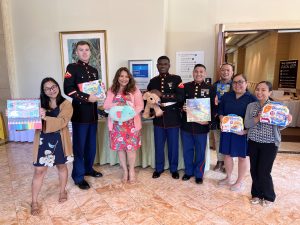 Toys for Tots is a seasonal endeavor in which Chamber member companies support Marine Corps Activity Guam's effort on island to ensure that a variety of toys and gift items are distributed in the community where they will do the most good. Toys for Tots has been popular among the membership and the generosity and support for this program is well supported by the employees of a variety of Chamber member companies.

Companies interested in participating as a drop off site or in collecting gifts from among your employees are encouraged to contact the Guam Chamber of Commerce to arrange to be added to the list and to receive a wrapped box to accept gift contributions. A list of suggested gifts for youth ages 0 –17 is available for download below.

This year, local Guam high schools are encouraged to participate in a contest to collect the most gift items for youth ages 13 – 17 during the Toys for Tots campaign season from October 3rd to December 10th. The winning high school will receive a cash prize of $1,000 and have their school name placed on a perpetual, traveling plaque that would be presented to the Student Body President of the winning high school prior to the holiday break.